This week, March 16-19, we to Florida A&M University to compete with more than 35 other teams from around Florida and the nation, in the Tallahassee FRC Regional.

Most students on the Ohms this year are new to the competitive robotics experience but have thrown themselves fully into learning the skills necessary to build a complex machine capable of playing “Rapid React,” a high-tech game similar to basketball – which includes a high bar pull-up at the end!

The Robot: It’s Complicated - and it took over 200 hrs to Build!

Since the FIRST Robotics Competition game challenge was released on January 8, team members working under the guidance of mentors learned to use Computer Aided Drafting (CAD) software to plan out their build, learned about electronics and programming, prototyped parts, and used almost every tool in the shop for their build – including bandsaw, drill press, table saw, CNC, laser cutter, bench grinder, riveter, 3D printer, and a variety of hand and small power tools.

Over the course of nine weeks, working after school, on weekends, and through holidays, we have invested over 200 man- and woman-hours in their build, at a cost of over $5500 for parts alone.

Dylan, at left in the photo below, a high school senior and our sole veteran team member on the Edgar Allan Ohms, describes the team’s strategy and the design of their custom robot, which they’ve named, “It’s Complicated” : 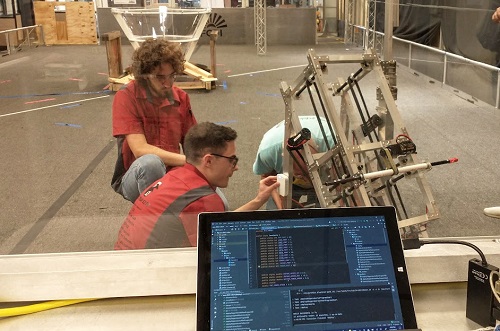 “To effectively accomplish the challenges presented by Rapid React, our robot was designed according to a strategy developed by the team. This strategy is to maximize the possible score by emphasizing speed over accuracy. An example of this is with our shooter. Rather than spending a fair amount of time lining up to shoot to the top goal, we decided to focus entirely on the low goal. Our theory was, if we could score two cargos into the lower hub in the time it takes for other teams to score one in the upper hub, then we would make for a more reliable scorer.

“Our robot is made up of three major mechanisms. Working from the front to the

back, they are: the cargo intake, the shooter, and the climber. The cargo intake is made up of two parallel arms with a shaft fitted with a combination of Mecanum and compliant wheels. The intake works by drawing the cargo in and pushing it up over the bumpers. Once within the frame, it is drawn into the shooter mechanism and lifted to the top by a belt system. The top set of belts, driven by two 775 motors geared at 5:1, is enough to launch the cargo into the lower hub. For the climber, we began with an Andy-Mark climber-in-a-box kit, but we soon custom-made a double-sided hook to allow for more efficiency when lining up to climb.”

The Edgar Allan Ohms students -ages 13-18 - have by choice spent more than 200 hours in the AMRoC workshop building their intricate machine, most working from a limited initial knowledge base. We now head off to practical test of the machine we built, in a field of over 35 other teams that will test not only our engineering skills, but also our communications and teamwork skills, and our professionalism and grace under pressure.

Their robot will have to perform consistently well in 6-8 head-to-head high energy matches against other teams’ robots to vie for top scores, awards, and a chance to compete in the international FIRST Championship, held in Houston in April. The whole event will be live-streamed here March 17-19. 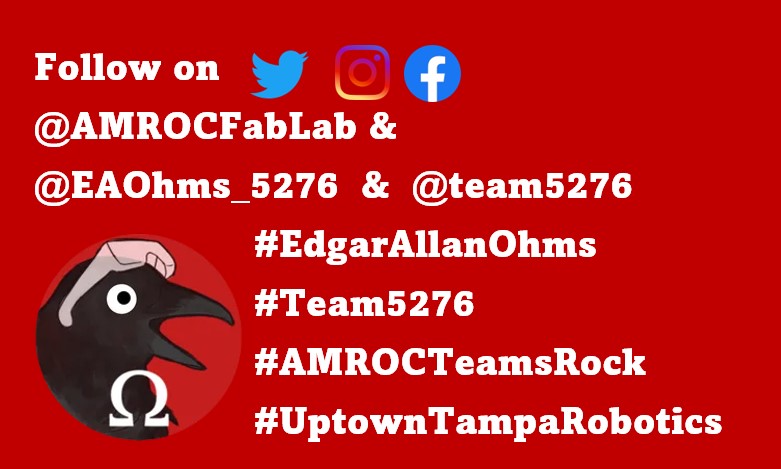 Thank you to our Sponsors and Mentors!